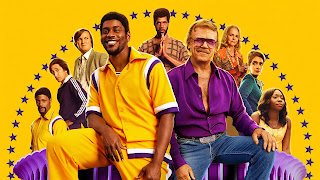 I’ve waited until a number of episodes for have aired but Adam McKay’s WINNING TIME: THE RISE OF THE LAKERS DYNASTY is just fucking absurd.  It’s playing on HBO and HBO Max.

But I do thoroughly enjoy hate-watching this steaming mess.  Little surprise that Jerry West is threatening legal action and Kareem Abdul-Jabbar has ripped the shit out of it in an article.

It is just insane.  So historically inaccurate it might as well be the rise of the Clippers dynasty.  And as Kareem accurately points out, the characters are entirely one-dimensional cartoons.  Jerry West, as character assassinated by Jason Clarke, comes off as the Tasmanian Devil on Red Bull.  Say good morning to him and he launches into a profanity-filled shit fit.  Kareem is this sullen figure who tells kids to fuck off.  Forget that he actually has a children’s charity.

Jerry Buss is Mr. Party Animal.  As played by John C. Reilly, he should be wearing a lamp shade on his head in every scene.  Sally Field plays Buss’ mother as part savvy business person and part seriously demented.  Not since SYBILL has she had to play more than one character at once, but SYBILL made sense.   The only actor who comes off well is Tracy Letts.  It’s like he’s in a different series.

The scripts are ludicrous.  Every rule you learn in Screenwriting 101 they break.  Listen as characters spew out endless exposition to people who already know the exposition.  Or characters breaking the fourth wall to blatantly tell you something they should artfully be showing.

And speaking of the fourth wall, this series is loaded with every cheesy Adam McKay bullshit gimmick.  Freeze frames to show graphics, film switching from 35mm to 16 mm to tape, to black & white, etc.  For absolutely no reason.  He’s done it in a couple of movies.  We get it.  Now it’s just incredibly annoying.

The so-called “comedy,” as Kareem puts it, is all bad SNL skits.

Apparently, it’s a hit for HBO.  Hey, I watch it.  I wonder how many watch it for the right reasons — and those are to laugh… at all the wrong things.

(Notice I went through this entire review without one basketball metaphor.)

We Own This City on HBO: cancelled? season 2? – canceled + renewed TV shows

We Own This City on HBO: cancelled? season 2? - canceled + renewed TV shows