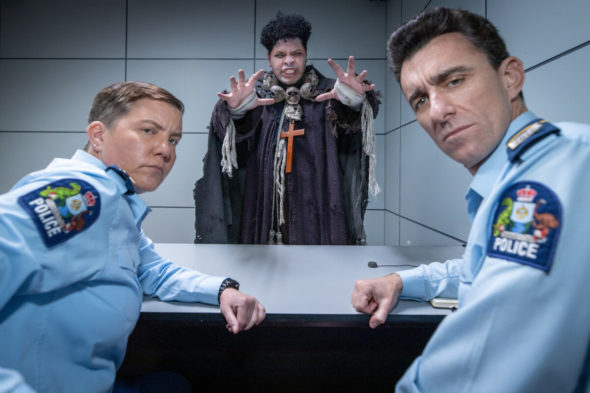 Officers Minogue and O’Leary are returning for their final cases. The CW has picked up the fourth season of Wellington Paranormal which will begin airing on July 27th. The series originates in New Zealand where it’s already been announced that season four is the end.

A comedy-horror mockumentary series, the Wellington Paranormal TV show was created by Jemaine Clement and Taika Waititi. The program is a spin-off of the 2014 What We Do in the Shadows film and the TV series that followed. The show stars Mike Minogue, Karen O’Leary, and Maaka Pohatu. The story follows the adventures of Officer Kyle Minogue (Minogue) and Officer O’Leary (O’Leary). The pair are hard-working members of the Wellington constabulary’s paranormal unit who, under the supervision of Sergeant Ruawai Maaka (Pohatu), investigate supernatural occurrences that arise in the capital of New Zealand on a surprisingly regular basis.

The third season of Wellington Paranormal averages a 0.03 rating in the 18-49 demographic and 204,000 viewers in the live+same day ratings (includes all DVR playback through 3:00 AM). Compared to season two, that’s down by 38% in the demo and down by 9% in viewership.

The third season finishes airing on The CW on Wednesday, July 20th.  The fourth season will launch the following week and the series finale is expected to air on August 31st.

What do you think? Do you enjoy this comedy series? Will you be sad to see Wellington Paranormal end? Would you have watched a fifth season?

Tales of the Walking Dead Cast: Meet the Actors of the TWD Spinoff