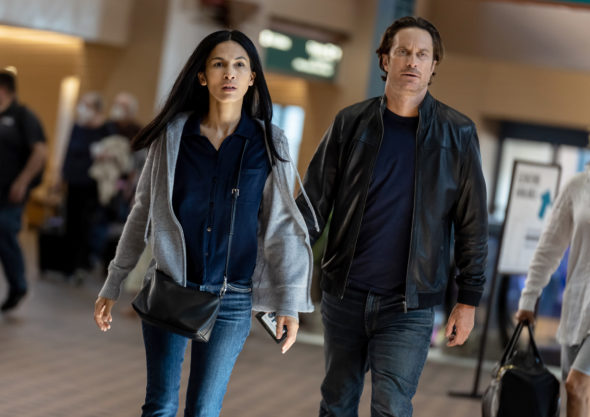 The network’s highest-rated new show is back for season two. Has the The Cleaning Lady TV show been cancelled or renewed for a third season on FOX? The television vulture is watching all the latest cancellation and renewal news, so this page is the place to track the status of The Cleaning Lady, season three. Bookmark it, or subscribe for the latest updates. Remember, the television vulture is watching your shows. Are you?

Airing on the FOX television network, The Cleaning Lady TV show stars Elodie Yung, Oliver Hudson, Adan Canto, Martha Millan, Faith Bryant, Sean Lew, Eva De Dominici, Naveen Andrews, and Sebastien and Valentino LaSalle. In the story, Thony De La Rosa (Yung) is a whip-smart Cambodian doctor who comes to the U.S. for medical treatment to save her son, Luca (LaSalle), who’s been diagnosed with a life-threatening immunodeficiency disorder. When the system pushes her into hiding, Thony refuses to give up. After a run-in with a lieutenant of a powerful crime syndicate, Arman Morales (Canto), she becomes a cleaning lady for their operation. Crossing into a world of moral greys, Thony begins to live a double life, keeping secrets from her family, while cleaning crime scenes for Arman and dodging the law, including the smooth-talking FBI Agent Garrett Miller (Hudson) who is in pursuit. In season two, Thony and Agent Miller search for her son. Thony’s sister-in-law, Fiona (Millan), protects her own son (Lew) after an incident. Meanwhile, Robert Kamdar (Andrews), a charming former lover of Arman’s wife, Nadia (De Dominici), tries to drive a wedge between the couple. As Thony continues to entwine her business undertakings with Arman, she is dragged further across the moral line and into the dark underbelly of Las Vegas.

The second season of The Cleaning Lady averages a 0.00 rating in the 18-49 demographic and 0.00 million viewers in the live+same day ratings (includes all DVR playback through 3:00 AM). Compared to season one, that’s down by 0% in the demo and down by 0% in viewership. While these numbers don’t include further delayed or streaming viewing, they are a very good indicator of how a show is performing, especially when compared to others on the same channel. Though other economic factors are involved, the higher-rated shows usually get renewed and the lower-rated ones get cancelled. Find out how The Cleaning Lady stacks up against other FOX TV shows.

As of September 20, 2022, The Cleaning Lady has not been cancelled or renewed for a third season. Stay tuned for further updates.

Will FOX cancel or renew The Cleaning Lady for season three? The series has been one of the network’s most successful series and, perhaps just as importantly, is also co-produced by FOX (with Warner Bros. Television). This is important because, since the sale of the FOX studio to Disney, the network has had to license most of its shows from outside sources. That means less profit for the network. So, unless the ratings for The Cleaning Lady completely fall apart, I think it will be renewed for a third season. I’ll update this page with breaking developments. Subscribe for free alerts on The Cleaning Lady cancellation or renewal news.

What do you think? Do you hope that The Cleaning Lady TV show will be renewed for a third season? How would you feel if FOX cancelled this TV series, instead?

Check out our FOX status sheet to track the network’s new series pickups, renewals, and cancellations. You can find lists of cancelled shows here.

Shay Mitchell Seemingly Comes Out as Bisexual in New TikTok