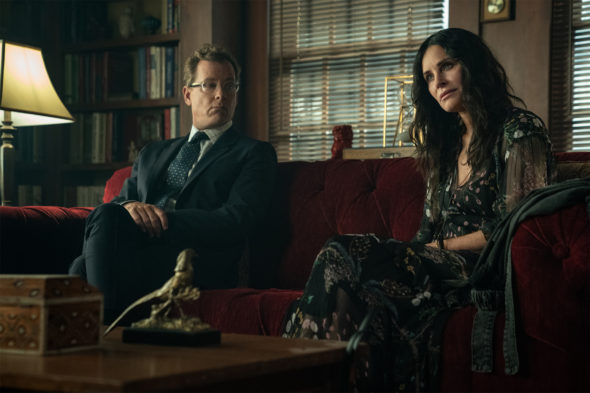 The Phelps family’s troubles aren’t over yet. Starz has renewed Shining Vale for a second season. The first season of eight episodes finished airing last month.

A horror-comedy series, the Shining Vale TV show stars Courteney Cox, Greg Kinnear, Gus Birney, Merrin Dungey, Dylan Gage, and Mira Sorvino. The story begins as a dysfunctional family moves from the city to a small town, into a house where terrible atrocities have taken place. Wife and mother Patricia “Pat” Phelps (Cox) is a former “wild child” who rose to fame by writing a raunchy, drug-and-alcohol-soaked women’s empowerment novel 17 years ago. Pat is now clean and sober but totally unfulfilled. She still hasn’t written her second novel and can’t remember the last time she had sex with her ever-optimistic husband, Terry (Kinnear). Her teenage kids, Gaynor (Birney) and Jake (Gageare), are at that stage where they don’t want their mother in their lives. Pat is convinced she’s either depressed or possessed. It turns out that the symptoms are exactly the same. Everyone has their demons, but for Pat Phelps, they may be real.

Airing on Sunday nights, the first season of Shining Vale averages a 0.02 rating in the 18-49 demographic and 158,000 viewers in the live+same day ratings (including DVR playback through 3:00 AM). While these numbers don’t include further delayed or streaming viewing, they are a very good indicator of how a show is performing, especially when compared to others on the same channel.

The second season renewal of eight episodes was announced via Twitter.

You didn’t think we’d leave you on a cliffhanger like that, did you? #ShiningVale will return for Season 2. pic.twitter.com/hlIEPcqyKR

What do you think? Have you checked out the Shining Vale TV series on Starz? Are you glad that this show has been renewed for a second season?