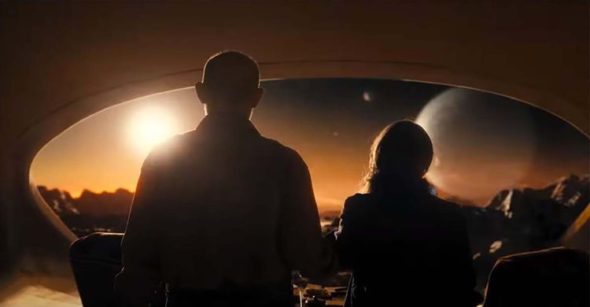 The Night Sky series has been sunset. Prime Video has cancelled the science-fiction show so there won’t be a second season.

A drama, the Night Sky TV show stars Sissy Spacek, J.K. Simmons, Chai Hansen, Kiah McKirnan, Julieta Zylberberg, Rocío Hernández, and Adam Bartley. Spanning space and time, the story follows Irene (Spacek) and Franklin York (Simmons). Years ago, the couple discovered a chamber buried in their backyard which inexplicably leads to a strange, deserted planet. They’ve carefully guarded their secret ever since, but when an enigmatic young man (Hansen) enters their lives, the Yorks’ quiet existence is quickly upended. The mystifying chamber they thought they knew so well turns out to be much more than they could ever have imagined.

Co-produced by Amazon Studios and Legendary Television, the series debuted on May 20th and all eight episodes were released the same day. Deadline reports that, while the series garnered positive reviews, Night Sky didn’t attract a large enough audience to justify the high-cost investment of making a second season of this sci-fi series.

While the show didn’t attract a large enough audience on Earth, perhaps the series might find more appreciation in other parts of the universe.

Prime Video, in conjunction with Amazon Web Services, SES, and Intelsat, beamed the first episode of the sci-fi drama series into outer space just in time for the series premiere. This marks not only the farthest distance from the earth that a TV series has been distributed but also makes Prime Video the first streamer to distribute its content directly into space.

What do you think? Have you watched the Night Sky TV series on Prime Video? Are you disappointed that there won’t be a second season?

‘The Challenge USA’ Premiere Recap Episode 1 — Who Was Eliminated?

‘The Challenge USA’ Premiere Recap Episode 1 — Who Was Eliminated?