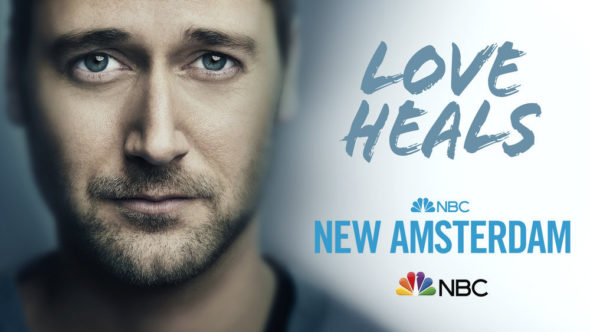 We don’t have to worry about New Amsterdam being cancelled right now. The NBC series has already been renewed for a fifth season. But, will that be the end of this Tuesday night drama? Will New Amsterdam land an early sixth season renewal? Stay tuned.  *Status update below.

A medical drama, the New Amsterdam TV show stars Ryan Eggold, Janet Montgomery, Freema Agyeman, Jocko Sims, and Tyler Labine, with Michelle Forbes, Sandra Mae Frank, Shiva Kalaiselvan, and Chloe Freeman recurring. Doctor Max Goodwin (Eggold) is a caring physician whose goal is to fix a broken medical system and to provide exceptional care to the people who need it most. He inspires (almost) everyone around him, and will stop at nothing to breathe new life into the understaffed, underfunded, and underappreciated New Amsterdam Medical Center. Those working with Goodwin include Dr. Lauren Bloom (Montgomery), the head of the ER; oncologist Dr. Helen Sharpe (Agyeman); cardiovascular surgeon Dr. Floyd Reynolds (Sims); and psychiatrist Dr. Iggy Frome (Labine). In season four, following a tough year, it’s a new chapter in the characters’ lives, focused on finding more joy. That may not be easy with the addition of Dr. Veronica Fuentes (Forbes) to the team. In an effort to help turn around the overburdened and underfunded hospital, her first order of business is to tear down every progressive program Max has erected.

The ratings are typically the best indication of a show’s chances of staying on the air. The higher the ratings, the better the chances for survival. This chart will be updated as new ratings data becomes available.

5/10 update: You can see the latest night’s ratings in context.

Note: If you’re not seeing the updated chart, please try reloading the page or view it here.

For comparisons: Season three of New Amsterdam on NBC averaged a 0.46 rating in the 18-49 demographic and 3.62 million viewers.

Note: These are the final national ratings, including all live+same day viewing and DVR playback (through 3:00 AM). Early fast affiliate ratings (estimates) are indicated with an “*”. While these numbers don’t include further delayed or streaming viewing, they are a very good indicator of how a show is performing, especially when compared to others on the same channel. There can be other economic factors involved in a show’s fate, but typically the higher-rated series are renewed and the lower-rated ones are cancelled.

What do you think? Do you like the New Amsterdam TV series on NBC? Are you glad that it’s been renewed for a fifth season?

The difference between amateurs and professionals