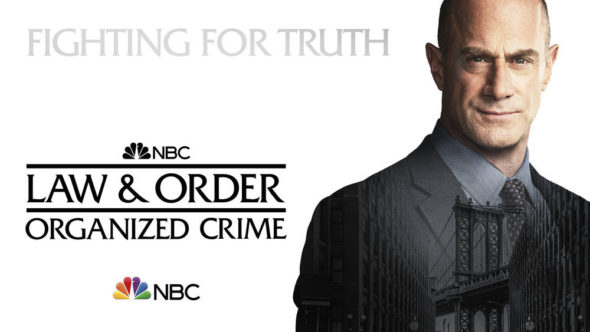 In the spring, Law & Order: Organized Crime had a great launch but the NBC show’s ratings quickly dwindled downward. How will this police drama fare this time around? Is it certain to be renewed for season three, or could it possibly be cancelled? Stay tuned. Status Update Below.

Law & Order: Organized Crime is a spin-off of the long-running Law & Order: SVU TV show and stars Christopher Meloni, Danielle Moné Truitt, and Ainsley Seiger. Recurring actors include Dylan McDermott Tamara Taylor, Mariska Hargitay, Ellen Burstyn, Ron Cephas Jones, Vinnie Jones, Lolita Davidovich, Mykelti Williamson, Guillermo Díaz, Dash Mihok, Michael Raymond-James, Mike Cannon, and Izabela Vidovic. The story follows the detectives of the NYPD’s Organized Crime Control Bureau as they work to dismantle the city’s most vicious and violent illegal enterprises. Det. Elliot Stabler (Meloni) returns to the force after a decade away and must rebuild his life after a devastating personal loss. Stabler’s sergeant and partner, Ayanna Bell (Truitt), leads the task force and has a long-game strategy to take them down from the inside. Observant and deceivingly smart, Jet Slootmaekers (Seiger) utilizes her tech expertise and hacking skills to give the team a leg up on striking their target.

The ratings are typically the best indication of a show’s chances of staying on the air. The higher the ratings, the better the chances for survival. This chart will be updated as new ratings data becomes available.

5/6 update: You can see the latest night’s ratings in context.

Note: If you’re not seeing the updated chart, please try reloading the page or view it here.

For comparisons: Season one of Organized Crime on NBC averaged a 0.79 rating in the 18-49 demographic and 4.78 million viewers in the live+same day ratings.

Note: These are the final national ratings, including all live+same day viewing and DVR playback (through 3:00 AM). Early fast affiliate ratings (estimates) are indicated with an “*”. While these numbers don’t include further delayed or streaming viewing, they are a very good indicator of how a show is performing, especially when compared to others on the same channel. There can be other economic factors involved in a show’s fate, but the higher-rated series are typically renewed and the lower-rated ones are cancelled.

What do you think? Do you like the Law & Order: Organized Crime TV series on NBC? Should it be cancelled or renewed for a third season?

The Best Beauty Looks From the 2022 BET Awards

We Tried On Skims’s Best-Selling Bra and Underwear

Glastonbury Festival Style Is Back and as British as Ever