THE SHOW | Netflix’s The Sandman

THE PERFORMANCE | It may sound odd to say we want more Death in our lives, but now that The Sandman’s first season is streaming on Netflix, that’s certainly the case.

Episode 6 of the comic-book adaptation introduces Howell-Baptiste as Dream’s sister, Death, who turns out to be a not-so-grim Grim Reaper. Series co-creator Neil Gaiman recently told TVLine that, for the show to work, “You have to have a Death you can fall in love with. You have to have a Death who is the kind of person who you immediately go, ‘Yes, I would like to see you at the end of my life.” Howell-Baptiste is that person, in spades.

Though she appears in only one episode, the Good Place alum instantly commands the screen and provides a very welcome foil for the show’s highly emo title character. Howell-Baptiste broadcasts ease in every gesture, from the casual way she leans back against a park bench to the way she gently kneels down by an elderly man’s chair, chatting amiably with him before whisking him off to the afterlife.

As Death later reminds Morpheus, she’s been around forever, and what was once weariness in her job has turned into an appreciation of its uniqueness and a reverence for its responsibility. Howell-Baptiste truly makes us believe Death feels like she is part of the human condition, despite being so thoroughly outside of it: Her warm smiles and gentle placing of hands as she approaches those who are dying communicate the importance with which the character views her purpose.

The best part of Howell-Baptiste’s performance, though, is the way she plays up Death’s refusal to take herself — and especially her brooding brother — too seriously. Her loving, wake-the-Hell-up speech in the park, her gentle ribbing, her barely-contained eye rolls: All of them made us wish she were around more in the first season (and hope she will be in a potential Season 2).

HONORABLE MENTION | Peaceful stillness, thy name is Li Jun Li’s Grace. Li’s portrayal of Evil‘s recurring prophetess reached heavenly heights in Sunday’s episode, as the religious visionary encountered more on-screen turmoil than she has in over a season. The calm with which Li always infuses her character served her well in scenes silly (bouncing the giant beach ball with David) and sweet (offering Laura much-needed hope in the ball pit), and then was abandoned — with good reason and to great effectiveness! — as she sobbed and prayed over Monsignor Korecki at the hour of his violent death. Li completely committed to Grace’s anguish, forcing out a whispered Last Rites as the priest succumbed to his injuries. The shock Li played as he passed away was the perfect mirror for our own. 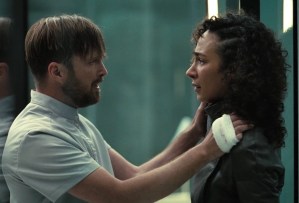 HONORABLE MENTION | There was no predicting how the reunion between Westworld’s Frankie and Caleb, so long in the coming, would play out. Sure enough, Aurora Perrineau and Aaron Paul got to navigate a whirlwind whiplash of emotions. First, there was violent intensity, when Caleb didn’t recognize his rescuer and thus pinned her against a wall. But once Frankie’s “Dad, it’s me” came out, followed by her recall of childhood memories, Caleb’s mood melted. Warm looks of recognition washed over each actor as dad and daughter processed the improbable. “You look exactly how I remember,” said Frankie, Perrineau’s eyes communicating disbelief and love. “I can’t believe how much you’ve grown,” Caleb marveled, as Paul slipped into proud parent mode. In an hour chockablock with death and destruction, this family reunion stood out, and was worth the wait. 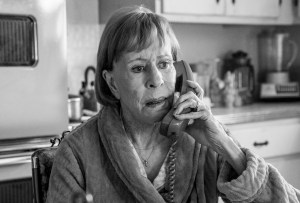 HONORABLE MENTION | At first, we thought Carol Burnett joining Better Call Saul‘s final episodes would just be a fun little cameo from a comedy legend, but then she came out and wowed us this week with a surprisingly complex and dramatic performance. As Jeff’s elderly mom Marion, Burnett displayed the wisdom of her years as she caught Gene slipping up during a phone call, with her inquisitive eyes registering the mistake without letting Gene know. Then she had nerves of steel as Marion confronted Gene about his lies and secret identity, even getting him to feel guilty for a moment as she sadly croaked, “I trusted you.” Burnett’s legacy as a TV icon is unquestioned, but it’s nice to see she can still add to that legacy — at 89 years old! — with finely calibrated work like this.

Which performance(s) knocked your socks off this week? Tell us in Comments!

Shay Mitchell Seemingly Comes Out as Bisexual in New TikTok