If a man is handsome, rich and charming, he’s probably trash.

That’s certainly the case in Lifetime’s Flowers in the Attic: The Origin, which explores Olivia Winfield’s twisted backstory and the complex reasons that led her to lock her grandchildren in an attic.

A prequel to 2014’s Flowers in the Attic and its sequel, Petals on the Wind, The Origin begins in 1920 with a younger Olivia Winfield (played by The Girlfriend Experience’s Jemima Rooper) working in her father’s office and looking forward to the freedom to vote soon.

Dad invites her to have dinner with a potential suitor named Malcolm Foxworth (Condor’s Max Irons), to which she reluctantly agrees. Oh, they’re also joined by her creepy cousin John Amos (The Vampire Diaries’ Paul Wesley), who’s just as devoted to prying into her personal life as he is his religious studies.

In classic This Is a Very Bad Man Pretending to Be Good style, Malcolm does everything right. He asks questions during their lively discussions about her father’s business, invites her for romantic walks, shuffles his plans to show a vested interest in her, and even gifts her a book he thought she might enjoy.

But he’s also cagey about his personal life and only offers up a few details: His mother died when he was five years old, and he lives in a big empty mansion because his father Garland (Kelsey Grammer) has been away traveling in retirement. Olivia quickly learns that Malcolm lied about his mother’s passing, but the debonaire bachelor has a good excuse for that. 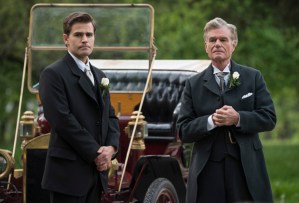 “When I said my mother died when I was a boy, I wasn’t lying. She did die — at least to me,” he tells her. Olivia apologizes for asking about it, and in the next moment, Malcolm is on his knees proposing. (Olivia, girl, you in danger.)

They quickly marry, and more red flags pop up: On their way to Foxworth Hall, Malcolm coldly tells Olivia her job is to run the household; the mansion is dark and dreary; Malcolm avoids her on their wedding night and disappears the next morning; her designated office space is tucked away in a windowless room; housekeeper Mrs. Steiner (Kate Mulgrew) tells Olivia that Malcolm doesn’t like people roaming and refuses to give more details about the family despite working there since birth; and maid Nella (T’Shan Williams) is reluctant to show Olivia the attic (where she’ll eventually imprison her grandkids).

Olivia ventures up there anyway, and that’s when we learn about Malcolm’s severe mommy issues. He keeps Corrine’s portrait locked away in the attic, and her old room has been preserved like a creepy museum. Malcolm loses it when he catches Olivia going through his mother’s things, but then shows her the room and spills more details, like the fact that Corrine was 17 when she married Garland. Plus, she took pride in her appearance, which means Malcolm despises women who wear makeup.

To outsiders, Olivia and Malcolm are the perfect couple. They dance closely during their wedding party, but no one can hear him whispering in her ear that he thinks she looks like a common prostitute for wearing a form-fitting dress and makeup. At the end of the night, Olivia retreats to her room (they do not sleep in the same bed) to weep, and that’s when Malcolm leads her to his mother’s room and assaults her.

Olivia makes plans to leave her husband, but soon learns from Amos that her father died in deep debt. With no inheritance or house to run to, she is stuck with Malcolm. The assaults continue, and she eventually announces her pregnancy. When she gives birth, Malcolm is disappointed that it’s a boy since he wanted a girl — who he’d name Corrine after his mother — and immediately asks how soon they can try for one. Olivia eventually gives birth to another boy, and Malcolm detests her since she’s unable to bear more children and has denied him “the one thing that I want.”

Garland returns to the mansion with his new wife, Alicia, who’s also super young but madly in love with him. She’s pregnant, and Olivia is jealous of their loving relationship. Garland is affectionate and even sleeps in the same room as his wife. The couple is overjoyed when their son Christopher is born. 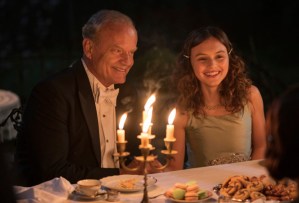 But Alicia is young and beautiful, and Nella warns Olivia to watch out for her because Malcolm “loves beautiful things.” Cue the lingering stares and Malcolm following Alicia to the pond when she goes for a swim. One night, Olivia finds Alicia screaming, Garland dead on the floor and Malcolm covering up a scratched wrist. Suspecting that Malcolm murdered his father, she bribes the doctor not to perform an autopsy, and Garland’s death is ruled a heart attack.

Months later, a depressed Alicia reveals more details from the night Garland died. Malcolm attacked her and then got into a scuffle with his father, choking him to death against the wall. After that, he kept assaulting Alicia, taking her to his mother’s room just like with Olivia. Appalled at this, Olivia tells her to take Christopher and her inheritance and start over somewhere else. But it’s too late to leave because Alicia is pregnant, and it’s definitely not Garland’s.

This really sets Olivia off, and she kills Malcolm’s prized lamb before having it served to him for dinner. Confronting her husband about Alicia later on, Olivia tells him sarcastically, “Congratulations. You’re the father and the stepbrother.”

She then points out that she knows about Malcolm killing Garland and what he’s done to his stepmother. She wants to destroy him and ruin his name, but she can’t since they are irrevocably tied to each other. To protect their reputation, she devises a plan to publicly send Alicia away and then sneak her back in later that night. The young woman will be sequestered away in the attic in the east wing, and Malcolm is not permitted to go anywhere near her or Olivia will tell everyone what happened, consequences be damned.

Oh, and Malcolm must set up a $2 million trust for both of their sons so they can one day be free of him.

What did you think of Flowers in the Attic: The Origin’s premiere? Grade the episode below and then let us know your thoughts in the comments.

In Thor: Love and Thunder Marvel Finally Does Right By Jane Foster

In Thor: Love and Thunder Marvel Finally Does Right By Jane Foster

Could ‘The Sandman’ Use More Jenna Coleman as Constantine? — TV Questions