By Ken Levine: Welcome back Saul 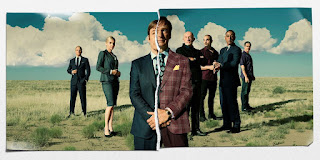 I’m so excited that BETTER CALL SAUL is back.  The final season premiered last night on AMC.  It’s probably the one show I try to watch the actual night it’s on (well, that and JEOPARDY).

I don’t know how long it’s been since the last season, but it occurred to me as I sat down to enjoy the season premier that I don’t remember anything that happened last year.  There was a big cliffhanger, but for the life of me I couldn’t recall what it was (which tells me it’s been waaaaay too long since the last season).

And as the new episode unfolded, some memories of last season did begin to surface.  It was not a great season as I now recall.  There was a lot of filler.  A couple of compelling sequences but not like the earlier years of the series, and not nearly as consistently excellent as BREAKING BAD.

So why was I excited?

Because I’ve become so attached to these characters that I care about them way more than I should.  And because at any time they’re capable of truly extraordinary storytelling.  Unlike LOST, they answer questions and tie up loose ends.  So you feel you’re in for a satisfying conclusion.

And they have an amazing ability to surprise you.  You can’t outguess them.

Ultimately, BREAKING BAD fans know the ending.  It’s where we meet Saul when he enters the BREAKING BAD world.  But will that be the ending?  I’m guessing not.  I’m guessing we’re in for some surprises.  Maybe big surprises.  And for that I’m all in, despite bumps in the road last season and a forgettable cliffhanger.  I’m ready to go on that ride wherever it takes me.

Fire In The Mountains – Trailer