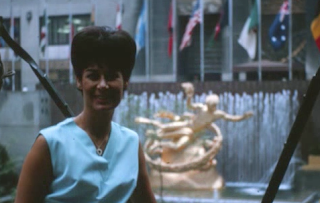 How important are moms?   I might not have a career were it not for mine.

David Isaacs and I were writing spec scripts at night, trying to break
in, going nowhere.  We had written a spec pilot that was an amateurish
mess that would have cost more to produce than AVATAR.  We then wrote a
spec MARY TYLER MOORE SHOW and RHODA.  Our ersatz agent submitted both
scripts and received two rejection letters (actually three — the RHODA
was submitted to two different producers on the show).   We were going
nowhere fast.

And then one day my mom went to play a round of golf and got assigned to
a foursome that included a gentleman named Gordon Mitchell.  She asked
what he did, and when he said he was the Story Editor of a new show that
just premiered called THE JEFFERSONS, she said, “Oh, my son is a great
writer.”  I’m sure he cringed, but he was a mensch and said he’d read
something we’d written.

So I got in touch, sent him our spec MARY TYLER MOORE SHOW.  He liked
it, invited us in to pitch stories.   They bought one and that was the
start of our career.

But we never would have had an in to THE JEFFERSONS had it not been for Mom.

So thanks, Mom.  For everything.   I miss you everyday.  Thanks also to
Debby, the mother of my children, to Annie & Kim, the mothers of my grandchildren.  And to all YOU mothers — we salute
you on this most deserved (although commercially manufactured) holiday.

And Now, a Roundup of Fabulous Finds From LGBTQ+ Brands