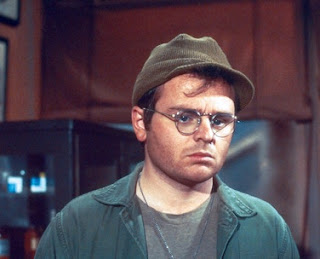 I love when I can sometimes go to the source.  Reader Michael Rafferty
submitted a Friday question.  Here’s the question and the answer from
the man himself, Gary Burghoff.  My EXTREME thanks to Gary for his time
and very illuminating response.

On MASH, first season, Gary Burghoff played Radar pretty much the same
as he did in the movie version. But,over time, Radar was softened and
became more gentle and naive. Was this a decision of Burghoff or was
this a creative decision of Larry Gelbart et al.?

In the original feature film MASH, I created Radar as a lone, darker and
somewhat sardonic character; kind of a shadowy figure. I continued
these qualities for a short time (review the Pilot) until I realized
that the TV MASH characters were developing in a different direction
from the film characters. It became a group of sophisticated, highly
educated Doctors (and one head nurse) who would rather be anywhere else
and who understood the nature of the “hell hole” they were stuck in.

With Gelbart’s help, I began to mold Radar into more Innocent, naive
character as contrast to the other characters, so that while the others
might deplore the immorality and shame of war (from an intellectual and
judgmental viewpoint), Radar could just REACT from a position of total innocence. This made RADAR super ACTIVE,
free and very interesting on a primary “gut” level, which at times
delivered the horror of war (as well as the dark humor we became known
for) in an effective, universal way that anyone could understand.

Larry, in one interview, was quoted as saying that Radar was his
favorite character to write for. I think he liked the fact that the
character lacked guile and he could write from his own honest
“child’s-self” as apposed to having to create “clever” intellectual
hyperbole.

ACTING IS RE-ACTING. LARRY gave Radar “permission” to REACT IN
SPADES!! in a free, delightful and direct manner. Once these decisions
were made, RADAR became PURE JOY to play!! God bless Larry Gelbart and
his talented writers such as your most excellent SELF!

I hope this helps.

Love ya, too.  And P.S., Radar was one of my favorite characters to
write as well.  It was a true honor to pen the “Goodbye Radar” episodes.