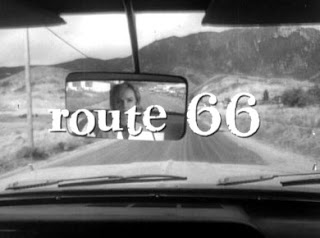 My cable company offers a couple of nostalgia channels featuring old time series. I like to call it the “Doesn’t Hold Up Network”
because a lot of these shows that I remember loving back in the day are
now just awful. Who knew the years wouldn’t be kind to GIDGET?

The reason I find myself stopping at one of these channels (besides
hoping to see Claudine Longet guest star as a murderer) is that as a kid
growing up in LA, I recognize most of the locations that they used. So
it’s kind of like stepping into a time machine, except the past is in
black-and-white and I can fast forward through the assisted living
commercials.

But a lot of local landmarks that have long since been turned into Jiffy
Lubes and Casa de Cockroach apartments reappear in all their glory
behind Honey West and Amos Burke.

ROUTE 66 is a great one for Way Back Machining. One week they
were in the old Marineland and the next they stopped off at Jungle Land,
home of many ferocious tranquilized animals. It’s a good thing the
scenery is so nostalgic because the show itself was terrible. The
dialogue tried to be Paddy Chayefsky and actor George Maharis tried to
be, well… an actor. Long florid speeches filled with imagery and
dripping with classical references describe a dog that chewed up a
garden. What’s disconcerting is that at the time this show originally
aired in the ‘60s I thought it was incredibly deep. Of course that’s
not why I watched it.  I was just hoping to see Claudine Longet with a
gun.

What struck me most about these old hour shows is how cheesy the
production values were. Today a streaming show
looks as sumptuous and well lit as a feature. If they get 3,000,000
viewers a week they’re lucky.   Back then, on network television drawing
an audience of 30,000,000 those old shows looked like they were made
for $22. Except for Jack Webb-produced shows like DRAGNET and ADAM-12.
$22 was the budget for the entire season. 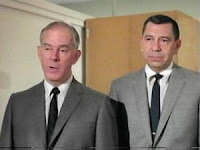 Sidebar: Harry Morgan told me this — Ever notice on DRAGNET that Webb
& Morgan wore the same suit every day? That’s because they went
out one day and shot footage of them getting in and out of cars and
going in and out of buildings, and to match those all year long they had
to be in those suits. I told Harry, “Well, at least you don’t have the
problem of having to wear the same thing every day here on MASH.
Oh…wait a minute…”

I think the difference is that audiences today have much higher
expectations. They can spot a cheapo production. With HD cameras they
can make home movies that look way better than KOJAK. (By the way, I
see a lot of San Fernando Valley locations in KOJAK – a show set in New
York.)

That’s something else I’m always on the lookout for – LA locations
masquerading as other parts of the world. I once saw the Burbank
airport substituted for Miami. Can’t think of many mountain ranges
behind the actual Miami airport. The Fugitive traveled all around the
country but one out of three small towns all seemed to have the same
Main Street. How dumb was Inspector Girard that he never figured that
out?

So even though a lot of these programs don’t stand the test of time I
still have a great fondness for them. What a treat that the Los Angeles
of my youth has been so captured on film. I feel bad that kids growing
up in Los Angeles today won’t have that same luxury. With production
costs what they are, it’s now the kids in Vancouver who will be able to
look back and see their city as it is today.