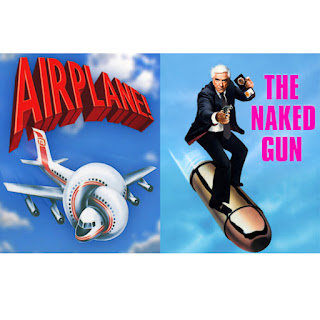 Here’s a Friday Question that became a Monday Post.

Are you a fan of spoof/parody movies (Airplane!, Naked Gun), would you ever write one and like to see them come back?

I’m a HUGE fan of those movies.  Can’t get enough of them.  What I like best is their objective — to just make people LAUGH as much and as often as they can.

Yeah, well there’s a reason there were lines around the block to see AIRPLANE and NAKED GUN.  There’s a reason, even though very few episodes were made, POLICE SQUAD remains a major cult favorite.

As our writers’ assistant, Lana, used to say when we were writing a script and mulling over some deep moment:  “People want to LAUGH.”

Kudos to Jerry & David Zucker and Jim Abrams for making AIRPLANE, NAKED GUN and really kickstarting the genre.  And to Mel Brooks whose BLAZING SADDLES pretty much invented the form.

David Isaacs and I worked on one such project.  Before it became a movie, David Zucker was trying to launch BASEKETBALL as a TV series.  We were part of the staff trying to shape the concept into some actual narrative.  Ultimately, nothing ever came of it, but it was fun conceptualizing and pitching jokes.

Here are the pros and cons of parody/spoofs:

Pros: You can draw laughs from anywhere, any style.  Puns, wordplay, physical comedy, shock humor, absurdity — anything is fair game.  All the things you normally pitch in a room and wish you could do you CAN do.   And parodies give you a target right from the get-go.

Cons: You’re only as good as your last laugh.  Stories are hard to construct because they mean nothing — just a coat rack to hang jokes.  So there’s no emotional investment.  The only thing keeping the souffle from collapsing is laughs.  So they better be damn good and lots and lots of them.

Ultimately, I prefer writing character-based comedy.   I’m more comfortable doing that and I think it’s what I do best.

I wish there were more parody/spoofs. I’d be happy to do one, but honestly there are better writers than me if a producer is looking to hire.  You probably don’t know the names but Michael McManus & Pat Proft are currently the very best of that genre.   It’s a unique skill and I’m in awe of their talent.   I can’t speak for all people, but I WANT TO LAUGH.

On The Count of Three – Trailer