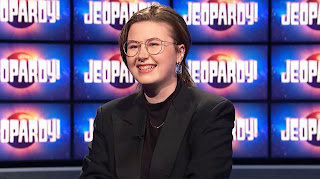 Several months ago, 23 year-old Mattea Roach went on JEOPARDY.  And stayed on JEOPARDY to win 23 straight times — a truly remarkable feat.   She pocketed a nifty $560,983 and will compete in the Tournament of Champions where she’ll win more — up to $250,000.  Not a bad nest egg to start a life.  (Please don’t spend it by investing in an indie movie.)   What a glorious run and I’m sure for Mattea it must’ve been difficult to keep her streak a secret in the intervening time between filming and airing.  I also imagine she was really looking forward to her shows hitting the air.

Did she anticipate the hate?  Probably not.  It’s now the new national sport — go on social media and try to tear down everyone who is successful or having a moment of glory.   By all appearances she seems like a very nice person.  And she’s only a kid (to me 23 is still a kid).  Here’s her statement after losing on Friday night”

(the experience) “feels still like a dream. I really came down here hoping to maybe win one game and so I still can’t believe it. It’s strange, obviously I didn’t come through in the last one, but I still feel so happy and so lucky to have had this experience.”

How can you hate someone like that?  But people do.  She was too chatty or her hands flapped around.  Matt Amoddio and Amy Schneider (two other super champions) also faced the same negative barrage for the same stupid picky reasons.

I hope that this experience and subsequent fame was a positive experience for Mattea and that the hate was not a blow to her self esteem.  She went on a game show to win some money to pay off her student loans.  She had no idea I’m sure that she would be thrust into becoming a national celebrity and every major newspaper in the country would treat her streak as actual news.   Man, I don’t know how I would’ve handled it when I was 23.  But I guarantee Mattea Roach handled it better.  She is a champion indeed.

VIVIZ Opens Up About Debuting and Dives Into Queendom 2