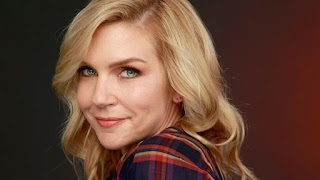 I ended yesterday’s post about BETTER CALL SAUL by saying I hope they don’t kill Kim.

For those not familiar with the show, Kim is played by actress Rhea Seehorn, and she is the breakout star of that series (with apologies to Nacho, and Gus, and Uncle Hector).  In short, she is a fabulous actress and amazing discovery.   Vince Gilligan and company do a spectacular job of casting truly special people.  Aaron Paul in BREAKING BAD and Rhea Seehorn in BETTER CALL SAUL.

Like most really great characters in the BREAKING BAD universe, she slowly evolves and her character changes.  It requires a subtlety and a level of skill few actors have.  And she has it in spades.  Also a mysterious side that’s very intriguing.

As a result, I, along with just about every BETTER CALL SAUL fan fell in love with “Kim.” She had the best scene in this week’s episode and her confrontation with the scary drug king was the highlight of last season.

One of the many great things about Gilligan’s shows is that he builds genuine gut-wrenching suspense.  He’s not above killing main characters.  And since Kim never appeared in BREAKING BAD there is concern she doesn’t survive this season.  Hopefully that’s not the case.  There are however, clues that suggest she is still among the living.  After all, we never saw Saul’s home life in BREAKING BAD.  She could have been there all along feeding the fish.  And in Saul’s new life with a new identity he’s in Omaha and Kim is from Nebraska.  Might she be part of his new life?  All of this is conjecture, and knowing the producers, the answer is something no one but them has thought of.

If you’re not a fan of BETTER CALL SAUL look for her in other things.  She’ll be easy to spot.  She’s the one who without even trying steals the scene.

The Album That Made Dio First Among Metalheads