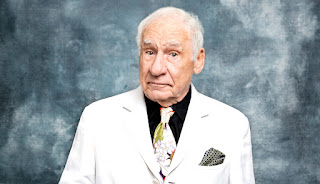 I’m flying across the country so it might take some time to post your comments today.  But I will get to them in 3,000 miles.  Here are this week’s Friday Questions.

Andy Laitman is up first.

Have you ever met or worked with Mel Brooks? The Producers, Blazing Saddles & Young Frankenstein are 3 of the funniest movies ever made. There are occasionally rumors of a History Of The World (Part Deux), but I doubt he could write-produce-direct-star in another movie at his age.

I’ve met him; never worked with him.  When I was on MASH in the late ‘70s at 20th Century Fox he was there too.  He was good friends with one of our staff writers, Ronny Graham and often would come up to the office and hang out with us at the end of the day.

I don’t have to tell you it was fantastic and he was hilarious.  I often pinch myself at my good fortune.

As for whether he could write/produce/direct at his age.  Never underestimate him.  He could still do all that and write songs too.  He’s a wonder.

What child actors have you worked with that have given consistently good performances?

The Sweeten kids on EVERYBODY LOVES RAYMOND.  All three of them.  Madylin and the twins, Sullivan and Sawyer.

And Tylen Jacob Williams on INSTANT MOM.  This kid has AMAZING comic timing, better than 90% of adult actors.

I think you’ve mentioned in the past you’ve worked in writer’s rooms that has a non-writing typist.

Since that person isn’t getting writing credit, or in the writing union, if they make a joke that’s worth using can you use it?

Yes.  And in some cases showrunners take unfair advantage of that.  If they permit the writers’ assistant to pitch (many shows don’t) and use some of their material they really should give them a script assignment at some point in the season as a reward.

A number of showrunners I know do do that and are real mensches, but a few don’t.  And they’re usually shocked when the writers’ assistant quits to work somewhere else.

And finally, from JS:

I had to babysit a bunch of kids (don’t even ask) – we ended up watching “Clifford the Big Red Dog”. It wasn’t bad – they were into it. What kid’s movie do you think hold’s up?

I don’t think it’s a matter of “holding up,” it’s just that kids outgrow movies and move on.  Last year my granddaughter, Becca was totally into FROZEN.  Now it’s ENCANTO.  Hopefully in a year it’ll be VOLUNTEERS.