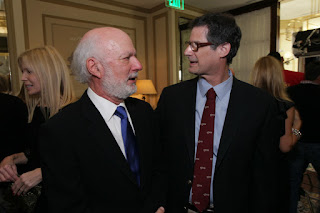 James Burrows is a TV legend.  He’s directed over a 1000 sitcom episodes (along with a feature and full length plays).  Credits include THE MARY TYLER MOORE SHOW, THE BOB NEWHART SHOW, TAXI, CHEERS, FRASIER, FRIENDS,  and WILL & GRACE.  As a director he was my mentor, and as a writer I have Jim Burrows to personally thank for getting on CHEERS.  Talk about a huge favor.

David Isaacs and I first met Jimmy (as we all call him, even at 80) in the mid 70’s when we were working together on THE TONY RANDALL SHOW for MTM.  Flash forward to early 1982 and I get a call out of the blue from Jimmy saying he and the Charles Brothers were going to be doing this new show on NBC called CHEERS and would we like to produce it with them?  We read the pilot script (so early a draft that Sam was still a former Patriots football player), loved it, met with the brothers, and thus began a nine-year relationship with CHEERS.

Jimmy, quite simply, is the best sitcom director of all-time.  He has eleven Emmys and countless DGA awards (I say “countless” because I don’t know how many, but it’s a lot).  He’s currently making the rounds promoting the book, sharing a lot of the funny stories he’s experienced along the way.

However, a couple of years ago Jimmy did my podcast and we got into a lot more detail on the process of directing.  It’s a fascinating interview well worth hearing or re-visiting.

Part one is here.

You can order the book here.  I recommend it (and not just because I’m mentioned).

It’s been an honor to work with Jimmy Burrows.   Of those thousand shows he’s directed, probably 50 are ones David and I wrote.  Each one is 10-25% better because he directed them.