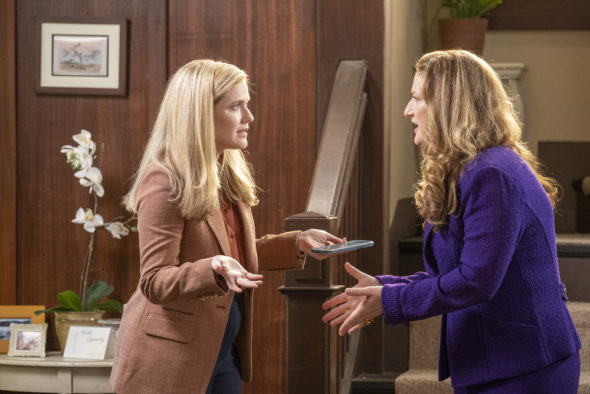 Will the first season of NBC’s American Auto TV show run out of gas? As we all know, the Nielsen ratings typically play a big role in determining whether a TV show like American Auto is cancelled or renewed for season two. Unfortunately, most of us do not live in Nielsen households. Because many viewers feel frustrated when their viewing habits and opinions aren’t considered, we invite you to rate all of the first season episodes of American Auto here. Status Update Below.

An NBC workplace comedy series, the American Auto TV show stars Ana Gasteyer, Harriet Dyer, Jon Barinholtz, Humphrey Ker, Michael B. Washington, Tye White, and X Mayo. Set in Detroit, the story finds the corporate executives of Payne Motors at a crossroads — adapt to the changing times or be sent to the junkyard. Shaking things up is the new CEO, Katherine Hastings (Gasteyer), whose leadership, experience, and savvy is only slightly offset by her complete lack of knowledge about cars. Those also working at the company include Sadie (Dyer), the type-A head of communications; Dori (X Mayo), the sweet assistant to the CEO; Cyrus (Washinton), the Chief Producer Designer; Elliot (Ker), the Chief Sales Officer; Wesley (Barinholtz), the direct descendant of the company’s founder; and Jack (White), an assembly line worker. From the corporate office to the factory floor, the crew of Payne Motors is driving home the laughs.

What do you think? Which season one episodes of the American Auto TV series do you rate as wonderful, terrible, or somewhere between? Do you think that American Auto should be cancelled or renewed for a second season on NBC? Don’t forget to vote, and share your thoughts, below.